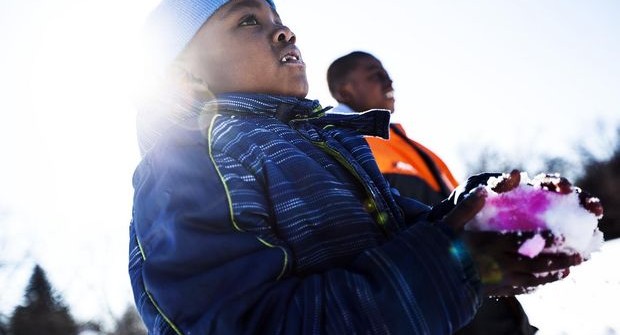 KALAMAZOO, MI – MarQuan White had never met a Kalamazoo Public Safety officer until Thursday when two of them approached him as he got off his school bus, fresh from a day at Linden Grove Middle School.

They were there, the 12-year-old said, to extend an invitation to him and other children to a block party, the Eastside Neighborhood’s “Arctic Blast.”

“It was fun, I liked it,” Marquan said later, after taking part in a scavenger hunt and racing a Public Safety officer in a potato sack race.

Marquan attended Thursday’s event at Kalamazoo’s Rockwell Park with his mother, Shawndra and a younger brother and sister. The family was among many who took part in the Arctic Blast, an event aimed at building relationships between police and community members.

Hot chocolate, coffee and doughnuts were provided at the gathering, which was organized by KDPS, the Eastside Neighborhood Association, Vanguard Ministries and Aviators, a local community development advocacy group.

In addition to the scavenger hunt, children at the event were able to take part in a snowball toss, basketball, bubbles, sledding, hockey, doing a hula hoop and snow golf.

Several youth also took part in a tug of war with several Public Safety officers. The children, with the help of some adults, including Pat Taylor, executive director of the Eastside Neighborhood Association, came out on top.

Thursday’s Arctic Blast was similar to a Halloween block party Public Safety hosted in October in the Edison neighborhood. Sgt. Matt Elzinga, of Public Safety’s Community Policing Unit, said the agency plans to host more of the events in the future in other city neighborhoods.

“It builds a sense of community and it shows a police officer in a different light,” Elzinga said. “… We may not see it now but what we do today, I think, we’re going to see pay off huge later on.”

Vanguard Church pastor Esteven Juarez said events like the Arctic Blast are meant to help break down stereotypes “on both sides of the street” and “build a true community.”

“That’s the biggest thing, to build authentic community,” Juarez said. “… It’s important that we come together in a collaborative effort … That breaks down walls, stereotypes and the barriers that separate us.”

Rex Hall Jr. is a public safety reporter for the Kalamazoo Gazette. You can reach him at rhall2@mlive.com. Follow him on Twitter.