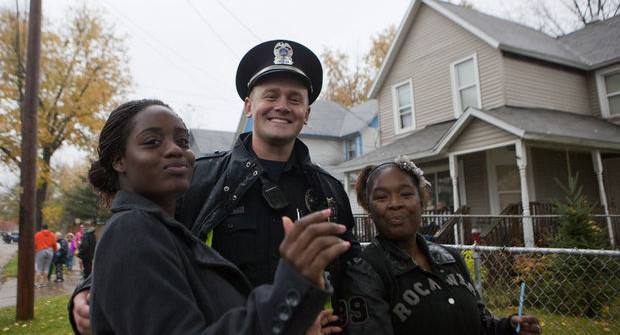 KALAMAZOO, MI — Have you ever seen a police officer in uniform do the “Thriller” dance in the Edison Neighborhood in Kalamazoo? Or a sergeant cheer contestants in a donut-eating contest?

A block party held by the Kalamazoo Department of Public Safety, co-hosted by Vanguard Church, gave Edison residents a chance to experience just such fun and friendly moments with police officers Thursday afternoon. Never mind the rain, kids and parents, teens and grandparents made their way to the tents put up on Washington Street to party with the officers.

“It was great to have an event with community interaction with officers and citizens,” said Public Safety officer Brandon Noble, who laughed and joked with teens he’d met while a community liaison officer at Loy Norrix High School.

The officers were good party hosts, making their way through the crowds, introducing themselves, giving kids stickers and talking with parents.

“We put this event together, partnered with the church, as a good way to build community trust — for police to know members of the community and the community to know each other,” said Sgt. Matt Elzinga, in between rounds of chatting with residents and judging the donut contest.

The event did seem bigger even than the crowds that made their way through the tents, bigger than the face-painting, craft-making and candy. For residents to have fun with officers in a neighborhood where they’re more likely to see uniformed officers responding to 911 calls felt special.

“This is fertile soil right here in this neighborhood,” said Kris Mbah, executive director of the Aviators group, who helped put on the event. “This is more community interaction than any other neighborhood in Kalamazoo right now, and on a rainy night too.”

“We need more events like this, one street at a time,” said Mbah. “We will show others this is how you do it — start building trust in the community.”